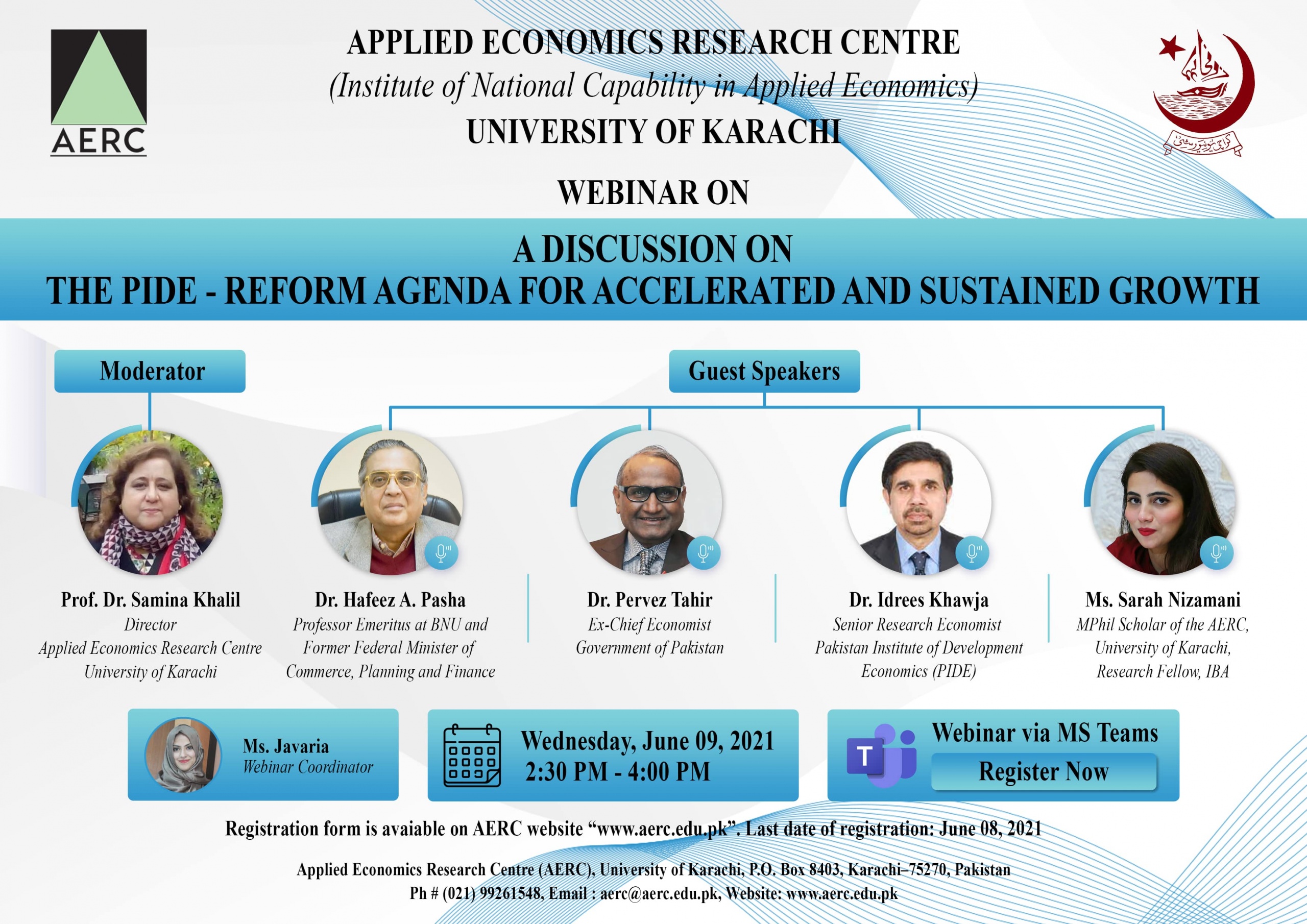 For the latest episode of its webinar series, the Applied Economics Research Center (AERC) at University of Karachi, hosted a discussion on the recently launched, Growth Reform Agenda by the Pakistan Institute of Development Economics – an agenda with the extensive talk on sustainable and accelerated economic growth in Pakistan. The session was moderated by the Director AERC, Prof. Dr. Samina Khalil and  joined by esteemed panelists including the renowned economist Dr. Hafeez A. Pasha, Professor Emeritus at BNU and Former Federal Minister of Commerce, Planning and Finance, Dr. Pervez Tahir, Ex-Chief Economist, Government of Pakistan, Dr. Idrees Khawja Senior Research Economist, Pakistan Institute of Development Economics (PIDE) and Ms. Sarah Nizamani, MPhil Scholar at the AERC, University of Karachi and Research Fellow at IBA Karachi.

The discussion began as Dr. Samina Khalil talked about the current economic situation of Pakistan and the necessity of the country to move swiftly towards growth from stabilization policies. Dr. Khalil emphasized that prerequisites of economic growth has to be taken in to account first and the necessary ground preparation to assimilate the growth in output at the pertinent institutions level. Dr. Khalil mentioned that the Reform Agenda of PIDE may also include the mechanism of distributive justice system of the output achieved due to higher levels of growth as it is now very much essential for the regional and provincial harmony. She also pointed out that sustainability of the economy also requires to incorporate environmental issues in the reforms agenda.

Dr. Khalil first invited Dr. Idrees Khawja, Senior Research Economist of PIDE, Islamabad to speak, who started off with his presentation of the reform strategy by the PIDE and identified several hurdles and bottlenecks in the path of Pakistan’s economic growth. One of the hurdles was the huge footprint of the government in the economy which was calculated at 67 percent and active role in various state-owned enterprises. He also pointed out that there were forty-five steps needed to lay an optic fiber for internet connectivity. Firms on average spent 577 hours and wade through 47 procedures to pay all the taxes for the year. Nine procedures were needed for a construction permit and that can cost up to nine per cent of the construction value. Land developers must obtain 22 NOCs from different agencies in order to proceed. This represented the cost of compliance and regulation in the country imposed by the government creating a “Sludge” economy. The presentation suggested reforms for the entire public service including the civil service, judiciary, regulatory bodies, and local governments, etc. as they must be reformed to serve as ‘enablers’ of the economy. It focused on decentralization, service delivery and a systematic approach of replacing the institutional malice with the institutional vision. The reforms also advocate series and frequent debates on the agenda to make the implementation a reality.

Dr. Hafeez Pasha commenting on the title of the Reform Agenda of the PIDE for Sustained and Accelerated Growth said that it should be Reform Agenda of the PIDE for Sustained and Accelerated and Inclusive Growth. Dr. Pasha focused his discourse on the taxation reforms in the country. According to him, it is an absolute necessity for Pakistan to discontinue the separate tax treatment of blocs of income derived as dividends and interest from financial instruments. He suggested that the sources of income should be clubbed as part of total income and the taxes deducted at source be converted into regular withholding / advance taxes as Pakistan is the only country treating income into separate blocs in the region, which makes spaces for loopholes in the system and makes taxing complicated. He believes that the way forward for Pakistan’s taxation was progressive taxing. Dr. Pasha extensively talked about the benefits of making the tax system more progressive, removing the tax breaks, tax give aways and concessions to the upper-income groups and making the tax system a much simpler, transparent and user friendly.  Dr. Pasha also showed his concern for issues including the large number of unemployed idle youth, which pushed the youth into totalitarianism and populism and the national asset of the country was going to a total waste. According to him, the only way for growth to be sustainable in this country was for it to be inclusive in all its way.

Speaking briefly, Dr. Pervaiz Tahir advocated the ideas presented by Dr. Pasha and commented that once ahead of countries like South Korea and Malaysia, Pakistan now is lagging behind Bangladesh which was a part of this country once. This shows how much Pakistan had regressed.  He suggested the budget was majorly spent on interest and the securities which shows the priorities of the country. The institutions responsible for the growth in the country neither had the capacity nor had the desire to listen to advice. According to Dr. Tahir, sustainable growth is difficult for Pakistan as Pakistan’s growth has never been inclusive. He believes that the gap is in thinking, in politics which needs to be fixed for the growth to sustain the country.

Ms. Sarah Nizamani, providing the youth perspective on the strategy identified some areas which were an absolute necessity for the rapid growth in the country. Advocating the case of women in the country, she identified that despite being half the population in the country, women were barely any part of Pakistan’s formal economy. The second issue she raised was related to agriculture. Despite the government’s famous claims of diverting enormous attention to agriculture, Roshan Digital Account has options to invest in Bonds, real estate and stock market but not agriculture. The third thing she talked about was the tax on freelancing as the country’s youth is unemployed in large numbers and in the recently published report by Pioneer, Pakistan has been ranked at 4th at freelancing, well above India and Bangladesh while Bangladesh has already exempted the freelancing tax to promote the industry.

This thought-provoking and intellectually stimulating session was attended by faculty, MS, PhD scholars and other members from academia from all over Pakistan.

The session ended with an interactive Q&A session which provided a chance for the audience to interact with the panelist. Dr. Khalil in the end thank all the panelists and attendees of the webinar for their participation. 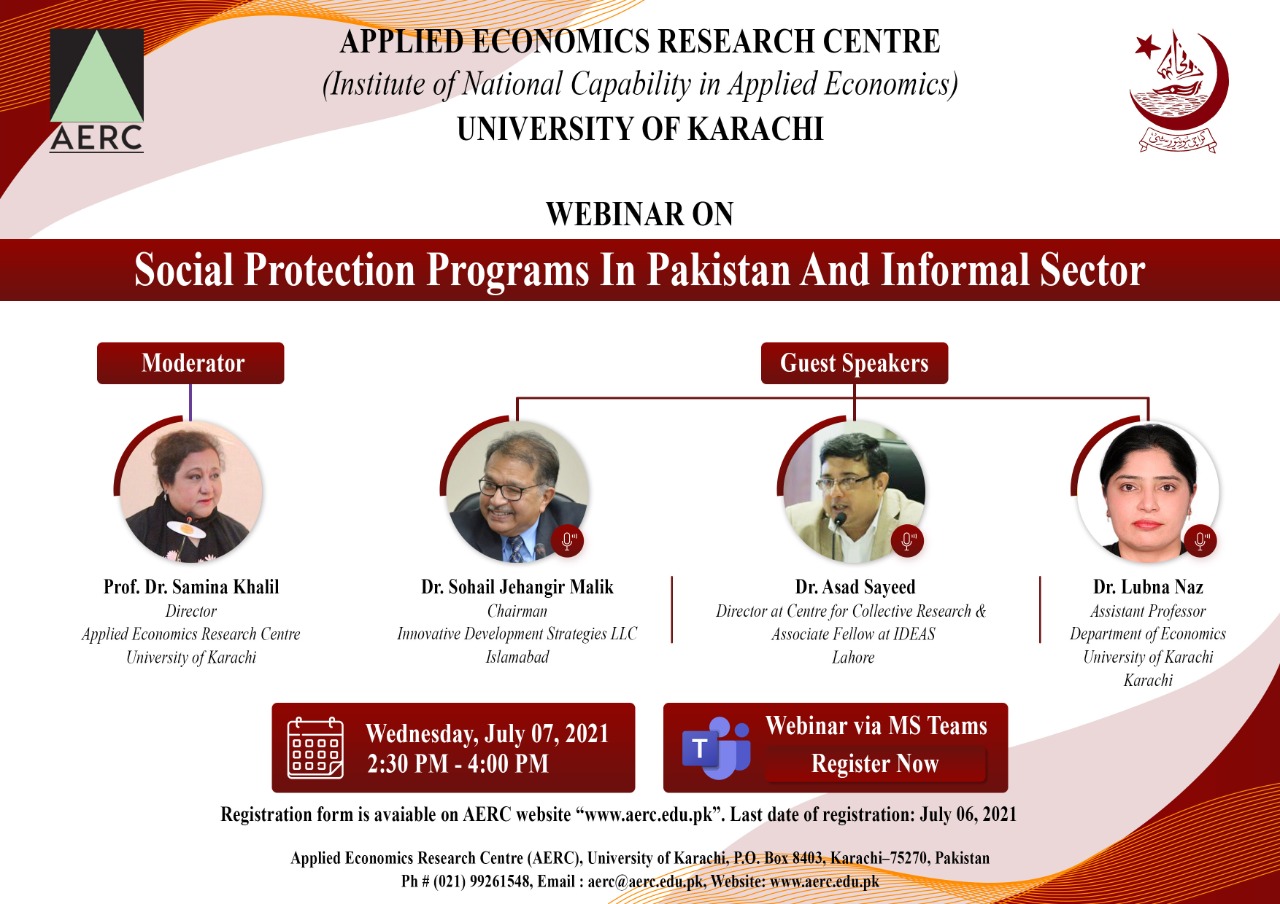 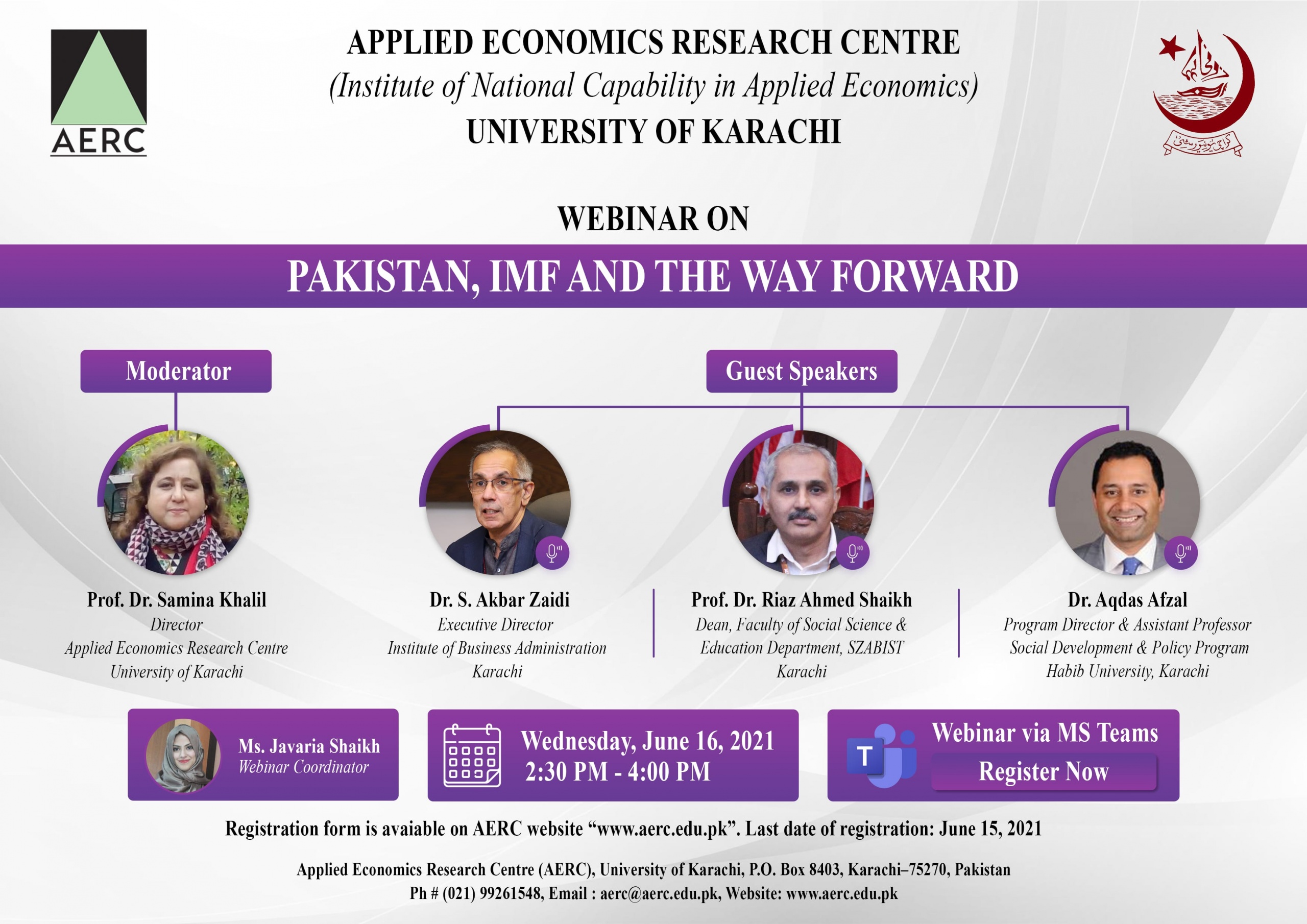 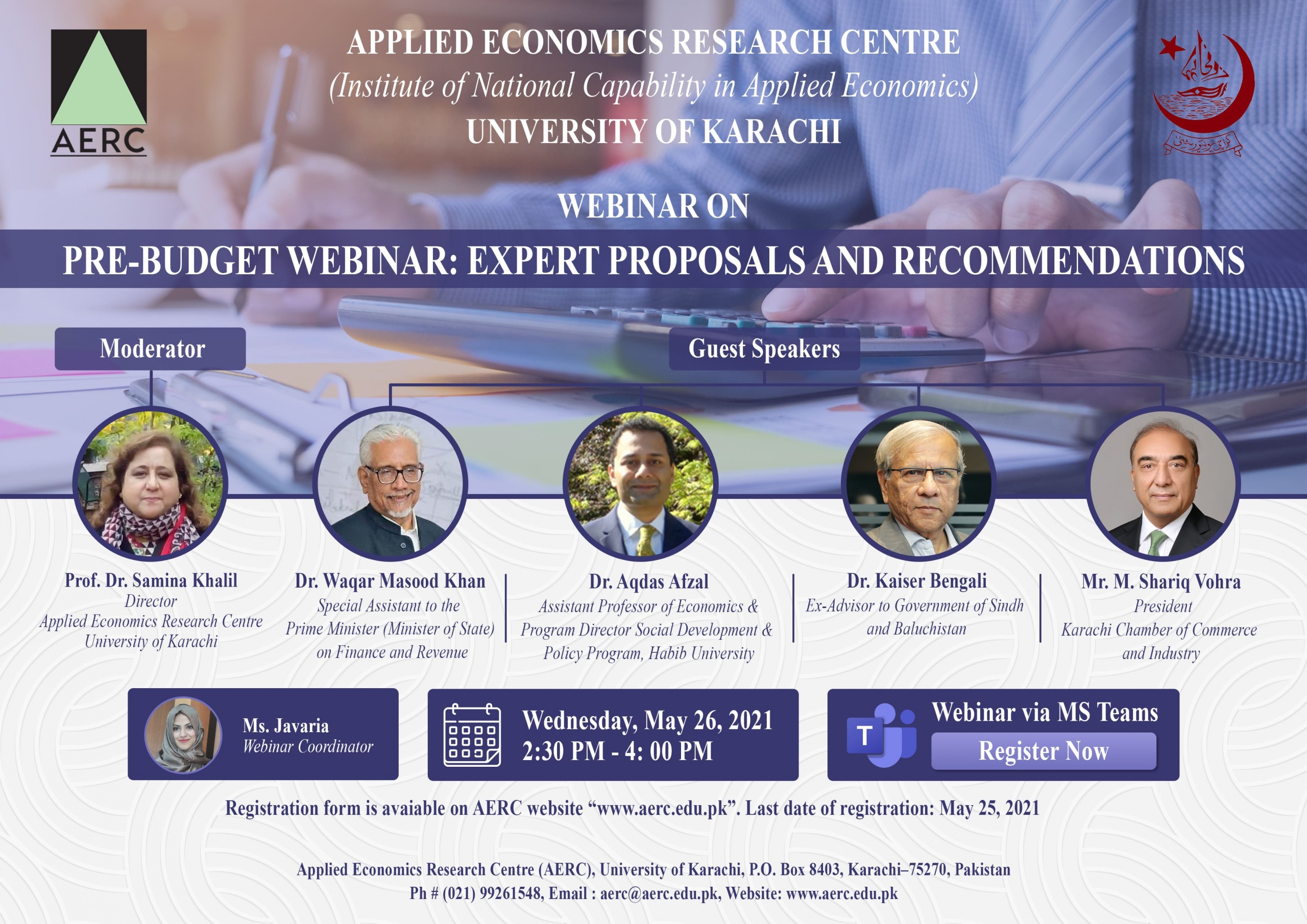 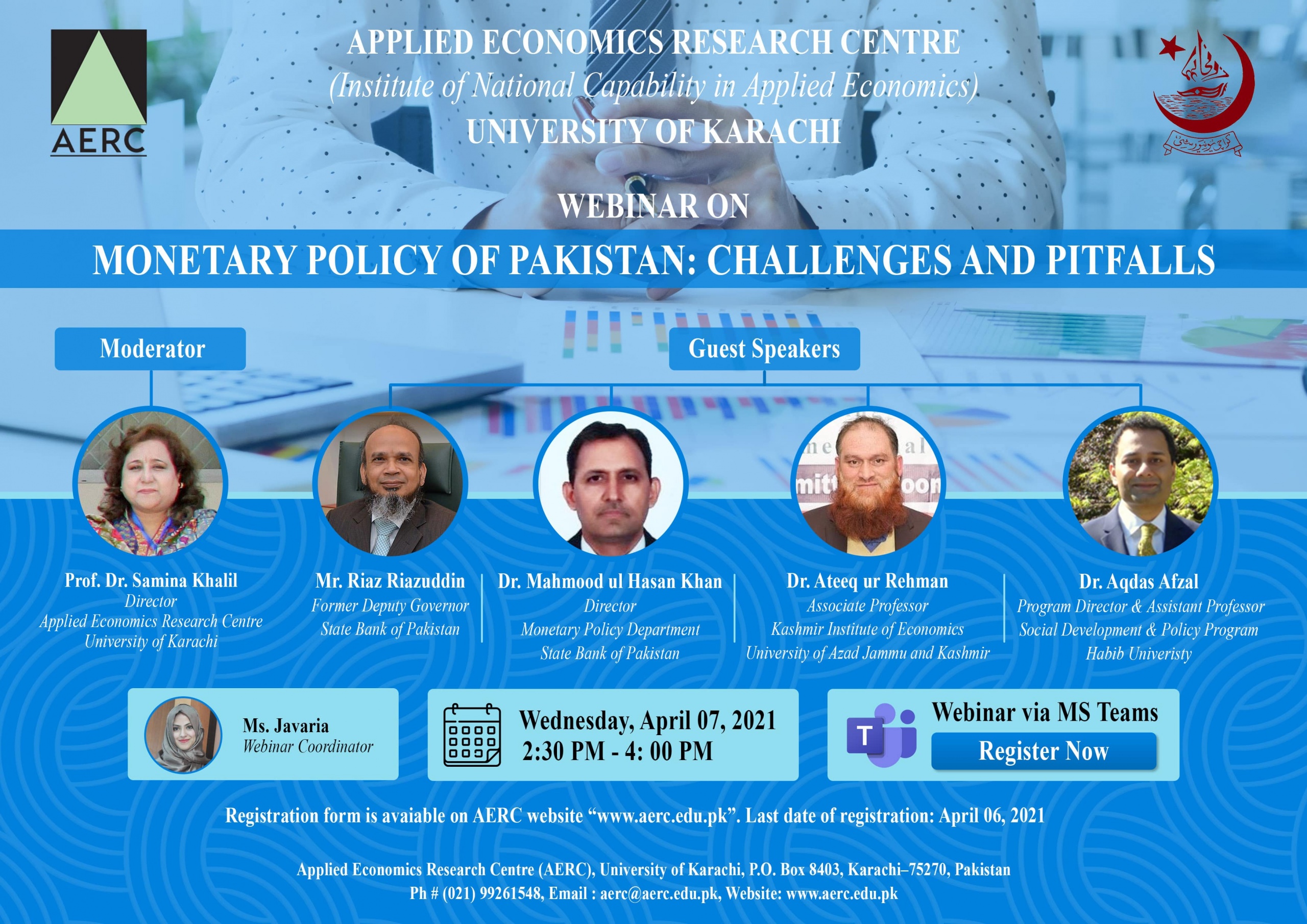