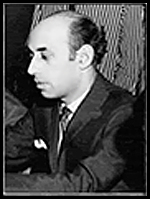 Prof. Dr. Ehsan Rashid was an eminent economist, who laid the foundation of the Applied Economics Research Centre (AERC), an Institution of National Capability in Applied Economics in 1973 and was appointed as its first Director.  His visions and intuitions are embedded in the research and teaching activities of the AERC, a leading institution of higher learning and research in the country.

Dr.  Ehsan Rashid was a brilliant student at Aligarh University and proficiently accomplished a Master’s degree in Economics, where he also taught for a few years as a Lecturer. His doctorate degree in Economics from the University of Bonn which he attained in 1956 was based on the Joseph Schumpeter’s Theory of Innovation.

During his illustrious career Dr Rashid held various posts of significance including that of the Vice Chancellor of the University of Karachi, Director of the AERC, Chairman Department of Economics, and Reader at the University of Karachi. He devoted his life to the pursuit of knowledge and strived continuously for the autonomy and development of institutions in the country. His numerous contributions to both will never be forgotten.

As a son of a celebrated man of letters [Prof Rashid Ahmad Siddiqui], Dr. Ehsan Rashid was himself a sophisticated and widely-read man. His range of wisdom and knowledge can be judged by his proficiency in Persian, English and Urdu.