On the Elusive Search for Social Justice under Democratic Capitalism since Adam Smith by Prof. Dr. Syed Nawab Haider Naqvi 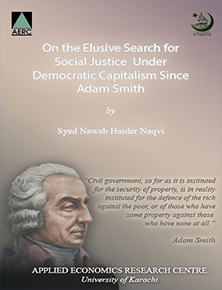 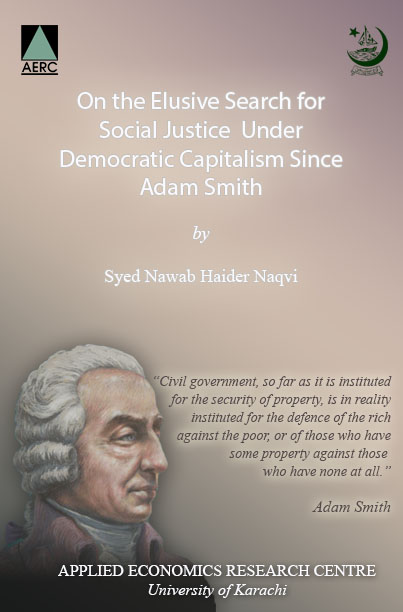 Prof. Dr. Syed Nawab Haider Naqvi is one of the most renowned scholar, academician and noted economist of Pakistan. Dr. Naqvi for his distinguished services in Economics received highest academic excellence award ‘Sitarai- Imtiaz’ from Government of Pakistan in 1991. His work was cited in Who’s Who in the World, 5th Edition (1980-81), while other credits include him receiving ECO Award for outstanding performance in the field of Economics in 1992 and HEC Life-Time Academic Achievement Award in the year 2009.

Dr. Nawab for his literary contribution received award of book of the year award for The Evolution of Development policy (Oxford) November1, 2016. Prof. Naqvi was also nominated in the list of the Outstanding People of the 20th Century in 1999 and in 2000 Outstanding Intellectuals of the 20th Century in the year 2000. Prof. Naqvi has authored more than 35 books and monographs and published more than 80 research articles in journals of national and international repute. He has the membership and association of more than 25 societies and boards and remained the Editor/Board of Editors for more than 10 national and international journals. Dr. Nawab has also delivered more than 60 lectures at national and international seminars/conferences and universities in the field of his interest and expertise which includes development economics, international economics, agricultural economics, comparative economic systems, econometric model-building and Islamic economics.

Prof. Dr. Syed Nawab Haider Naqvi has served in different capacities at both inside and outside Pakistan. He remained allied with Global Issues Initiative, Virginia Tech University as Associate Faculty, Federal Urdu University, Islamabad, Campus as HEC Distinguished National Professor and Director General, Institute of Development Research, Islamabad as President, Nepra, Government of Pakistan as Economic Adviser, and, MCB as Economic Adviser. Dr. Naqvi served as Director, Pakistan Institute of Development Economics, Islamabad and was placed in Article 16 of the Warrant of Precedence for Pakistan with the equivalent status as of a Federal Secretary during 1979-1995 and as Chief, Economic Affairs Division, Government of Pakistan during 1971-72. He also served as Visiting Professor at Heidelberg University, West Germany and in the Faculty of Administrative Science, the Middle East Technical University, Ankara.